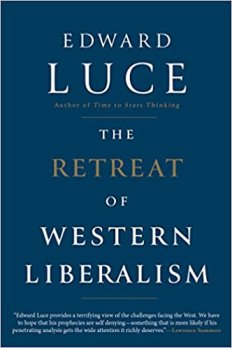 Like many of you, I’m sure, I’m trying to better understand the various problems and agitations facing America and Western societies in general at this time. Of course there are always struggles to overcome, but I think it’s fair to say we face some unique challenges at this time in our history. The better we can get our heart and mind around them the better chance we have of overcoming them.

With that in mind, I recently completed Edward Luce’s new book, The Retreat of Western Liberalism. A very interesting read. It’s not a book meant to make you feel good. Titles like that shouldn’t. But it will cause you to do something we all need to do in moments (as a nation and as individual) like these and that’s pause to reflect on what truly matters. For those who don’t know, the word Liberalism in this context (the book’s title) is referring to a set of fundamental principles that constitute the basis of all Western democratic societies. We’re talking about things like a free press, religious freedom, equality, free speech, etc, etc. Western governments are in-fact liberal democracies.

Edward Luce thinks the Western liberal democratic model of governance, while not dead, is in serious trouble:

Western liberal democracy is not yet dead, but it is far closer than we may wish to believe. It is facing its gravest challenge since the Second World War. This time, however, we have conjured up the enemy from within. At home and abroad, America’s best liberal traditions are under assault from its own president. We have put arsonists in charge of the fire brigade.

Donald Trump, Luce argues, is a symptom not the cause of the disease in America. So naturally the question becomes: What brought on this disease? Well what holds liberal democracies together, Luce says, isn’t culture but economic growth. And when that economic growth stalls, leading to massive inequality and a loss of social mobility (U.S has the largest gap of both in the West), we begin to see this threat to the political order and ultimately the survival of liberal democracy.

By any numerical measure, humanity is becoming rapidly less poor. But between half and two-thirds of the people in the West have been treading water — at best — for a generation. Tens of millions of Westerners will struggle to keep their heads above the surface over the coming decades. The spread of automation, including artificial intelligence and remote intelligence, which some call the fourth industrial revolution, is still in its early states. So too is what the American journalist Fareed Zakaria has labelled the rise of the rest. The emergence of China is the most dramatic event in economic history. We are living in an age of convergence no less dramatic than the age of divergence brought about by European colonialism and the Industrial Revolution. The downward pressure on the incomes of the West’s middle classes in the coming years will be relentless.

So the lack of economic growth and social mobility has fueled this threat and the future doesn’t look good unless we return to policies that help build a prosperous middle class while avoiding policies that build a strong oligarchy—which is what we’re currently doing. That’s right, as one writer put, “No bourgeoisie, no democracy.” Being able to aspire upwards, the dream of upward social and economic mobility, is at the heart of the American (Western) dream. When economic growth sags, when wage growth stagnates (as it has for decades now in America), when large segments of the population are either unemployed or underemployed, or working multiple jobs just to stay above water, then personal investment in the current political system starts to weaken and you have a rich soil for rebellion and the rise of demagogues (i.e. the Donald Trumps of the world). Some Americans, as we witnessed in our last election, are fully willing to risk disaster, and we need to be mindful that we’ve reached the point where a Donald Trump could carry 60 million votes in the U.S. A Trump victory would have been impossible, say, 10 years ago. The idea that Americans posses some quality that exempts us from the forces of chaos can be dismissed now as nursery story. (It was never the case anyway.)

The economy has been improving steadily since 2009, but the massive inequality and lack of social mobility will not improve with current government policies and hence the problem will only continue to grow until we have yet another large economic shock or downturn (which will come eventually) and those millions of Americans, still treading water (for so long), will simply sink below the surface. We don’t have to imagine what they will try to drag with them under the waves.

View all posts by Jeff Wills